Geraldine Di Marco, Mayor Maurizio Bevilacqua and John Di Marco during A Touch of Love and Hope meeting at the City of Vaughan.

A Touch of Love and Hope is a Registered and Incorporated Non-Profit Organization based in Vaughan, which benefits the Commonwealth of Dominica as well as Health Care Centres in the Greater Toronto area. Our aim is to fund raise and partner with various community groups to issue annual scholarships to mentally and physically challenged children and support projects of the Roman Catholic Diocese of Roseau, Commonwealth of Dominica.  Your Donations will also support the Mackenzie Health Foundation, Richmond Hill for a bigger MRI Scanner,  as well as vital Heart Failure Research and Training at the Peter Munk Cardiac Centre, Toronto General Hospital.  This research helps patients live better, longer; bringing immeasurable value to whole families. 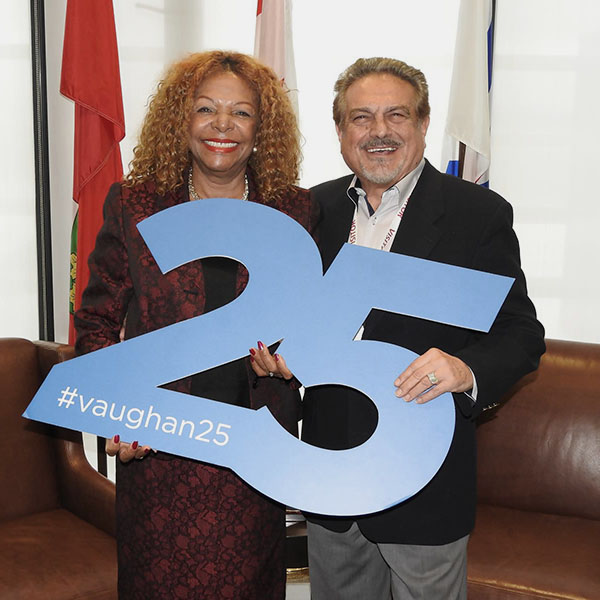 Geraldine and John Di Marco, Founders of A Touch of Love and Hope celebrating the 25th anniversary of the City of Vaughan – one of the fastest growing cities in Canada.

Geraldine and John Di Marco, Founders of A Touch of Love and Hope celebrating the 25th anniversary of the City of Vaughan – one of the fastest growing cities in Canada.  As residents of Vaughan for the past 31 years, we have experienced tremendous growth and transformational change throughout the last quarter-century.  It`s a momentous occasion in Vaughan this year as the City marks its 25th anniversary.  The City of Vaughan has come a long way since its humble beginnings in 1991 when its population was only 100,000. Now Vaughan has become a major contributor to the success of the Region and the GTA with a population of more than 320,000 people.

Welcome to our website!
A Touch of Love and Hope Foundation is a Registered Non-Profit Organization founded by Geraldine and John Di Marco.

Support our charitable work by donating to A Touch Of Love And Hope Foundation today! We accept all major credit cards through Paypal, and you don't need a Paypal account to donate online. Thank you dearly thank all those who have donated so far!

Powered by WordPress  |  Compass by InkThemes.